Strange Days Have Found Us 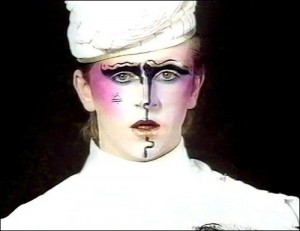 When a man the same age as me dies, a fellow Welshman and someone with whom I was for a while in the same broad line of creative work, I’m bound to notice and to be saddened. That person was Steve Strange, best known for his band Visage and their beautiful, haunting song Fade to Grey, but there was far more to his artistic career than this one hit, as you can learn from this BBC feature from 2009.

I never met Steve Strange and the simple truth is that I was always far more interested in the likes of Black Sabbath and the Doors than I was in the New Romantic movement or electronic music; nonetheless, it’s hard for me not to feel some kind of kinship with someone who moved away from their home village in south Wales to move to London for the same reason that I did, and at around the same time.

As you can see from the links above, Steve Strange enjoyed great success and acclaim for his various works, so I think it’s a terrible shame that he should have died so young and that some of his later years were blighted by addiction and mental turmoil.

“Never send to know for whom the bell tolls; it tolls for thee.”
John Donne

This entry was posted in Current Affairs and tagged Fade to Grey, London, Steve Strange, Visage, Wales. Bookmark the permalink.